We are all somewhere between straight and gay . . . . 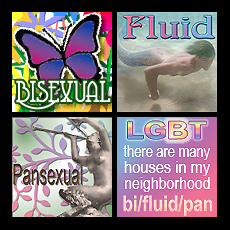 We have been told we do not exist, we have been told we must fit ourselves into either the “straight” or “gay/lesbian” boxes, during those bewildering moments when the culture suddenly decides to find us "chic" we are then told that our life-long sexual orientation is something we are doing to be cool . . .

Recently, the negative feelings against us poured out in their rawest form on to Websites, Comments, Email, Boards, Myspace, YouTube - “I am on a righteous crusade to eradicate the homopho-‘B’-ia in ‘LGBT.’ Bisexuals are hateful, double-crossing, homophobe-collaborating, duplicitous monsters.”

We gathered together at all levels, from four brave young people on YouTube to the Board of BiNet USA, and got those words banned from YouTube!

Our community is becoming more energized and active on many fronts (see previous blogs for examples), thanks to our dedicated leaders, the new members swelling our ranks, the many wonderful conferences, and even perhaps the current wave of “bisexual chic”, exemplified by Tila Tequila, who while some have mixed feelings about, but at least it makes people aware that we exist.

However, at this very wonderful, exciting time in our community, a threat exists, and sadly, it is from within ourselves, and over words and labels. But not even from ugly hate words; instead it is comes from words such as bisexual, pansexual, omnisexual, fluid, or even the lack or words, as in “I don’t label myself.”

It is not widely known, but many of the early gay and lesbian groups were actually founded by bisexuals, to use the early word. Indeed, the idea of our annual Pride Festivities including the Rally and March itself now celebrated worldwide by LGBT Communities across the globe was started 40 years ago by the out bi-identified LGBT leader Brenda Howard. Many of those early leaders had to hide their bisexuality due to the profound biphobia of that era. So for these leaders, and for many older bisexuals, claiming the word “bisexual” has been a life-long struggle. It is a word they now speak out loud with pride and love, a word that rings with affirmation, with struggles hard-fought, some won and some lost, but with memories of a life devoted to making this world a better place for other (say it Loud and say it PROUD!!!!) bisexuals.

However, life has a tendency to get more complex. Some of those who were excluded from Gay and Lesbian groups began to feel that excluding people was wrong, and wanted to build a movement that included all people who were marginalized due to not being completely “normal” sexually. Awareness grew of transgender people, who were also being discriminated against by mainline L and G groups much the same way we were. With this awareness came the knowledge that there are more than two genders, and with feminism came the feeling that rigid definitions of how men and women are “supposed” to be are wrong, and should be struggled against.

Just as the tendency of this culture to see things in rigid good/bad, either/or, white/black terms causes problems for bisexuals, as it made it hard for people to believe there was an in-between state, the very word “bisexual” became a problem for some people, as they began to feel it expressed the idea that there were only two sexes, male OR female, when we now know that there are intergender people, genderqueer people, sexual mosaics, XXY people, etc., and that gender is a continuum. Words like pansexual or omnisexual began to be used to express the concept of someone who could be aroused by and/or love people of all genders.

Other people reject labels entirely as a way of totally rejecting the idea that sexual identity is fixed. They also feel that if any group (bisexuals/pansexuals, etc.) is defined, some people will be excluded, and they wish to include all people marginalized by being different sexually.

Unfortunately, instead of accepting the fact that there are differences among people who are somewhere between gay and straight, a back-labeling phenomenon arose. Suddenly “bisexual” was held to mean people who are turned on by the differences between men and women, but don’t like sexually ambiguous people. There are people like this, but not only was the meaning of the word bisexual switched, somehow it began to have a negative connotation.

But for the people who had struggled for bisexual rights all their lives to have the meaning of the word they loved and were proud of changed on them, and for it to become negative, seemed like adding insult to injury, especially since most of them were actually pan/omnisexual, going by the new words. So there began to be a schism in those of us somewhere between straight and gay . . .

The next, hugely problematic word was “fluid”, This word actually is used to mean without boundaries, hard to define, not rigid, inclusive, etc. However, some people took it to mean “changing over time” and felt that if we say that bi/pansexuals’ sexuality changes over time, we are feeding into the Religious Right, who say that sexuality is a choice, and we can all choose to be straight.

It is clear if you read Lisa Diamond’s research that people are not the same in regard to the stability of their sexual identity. Some are rock-solid stable for their entire lives, and some are more changeable. Everyone is not like us. We cannot judge someone else because they are not the same as we are. To quote the late Reverend Dr. Martin Luther King:

We are all somewhere between straight and gay. If the pansexuals judge the bisexuals, and the stable people judge the fluid people, and/or vice versa, our community will fall apart before it even has a chance to come together.

On the other hand, if we understand that there are different kinds of not-straight/not-gay people, and that’s fine, and some are stable in their sexual identity and some are fluid, and that’s fine too, and we all have the right to identify ourselves exactly the way that suits us best, maybe instead of fighting amongst ourselves, and delighting Pharaoh, we can fight for all the rights that straight people have.

Then, when each and every L and G and B and T has every single right that straight people now have, we will finally be in the Promised Land and will be able to not worry about labeling ourselves at all, because then and only then it will not matter.Interested in this topic? Come join us on Facebook and keep the conversation going.
Posted by Estraven at 11:34 PM