Better late than never! Here is a summary of my Creating Change 2012 experiences. First things first, I have to say that Baltimore was a very interesting place. The weather was very nice and warmer than I had expected, this climate seemed to match that of the conference atmosphere. I checked in right on schedule and after a rest and sight-seeing, attended the opening plenary where NAACP President Benjamin Jealous took a stand for LGBT persons, in the same way that he stood up for his transgendered sibling. His full speech can be viewed on The Task Force's YouTube Channel, as well as a full transcript on their blog. 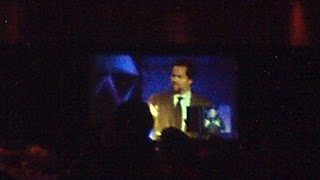 Now onto Bi/Pan/Fluid juicy goodness! Starting with Thursday's Bi/Pan/Fluid institute, I would say that there were about 30 to maybe 45 attendees, perhaps even more than that so it was a really good turnout! There were five co-facilitators: Ellyn Ruthstrom of Bisexual Resource Center, Robyn Ochs of BBWN, editor of the Bi Women's Newsletter and Getting Bi, Paul Nocera of BiRequest, writer and Huffington Post contributor, Amy Andre and myself of course repping BiNet USA. 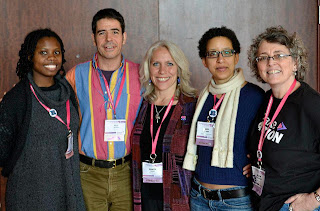 From left to right: myself, Paul, Robyn, Amy and Ellyn.

Ellyn and I opened up with the welcoming and the BINGO icebreaker respectively. This activity was a great way of us to meet, greet and find out our other commonalities and differences. Next Paul, who also hosted at the Bi/Pan/Fluid Hospitality Suite, led the introductions of the room and helped us all lay out some of the ground rules, discover each other's backgrounds and preferred pronouns and find out why everyone came to the institute. Next tackled the question, "What's in a name?" discussing our identities, what they mean to our intersectionalities and us.
After a short break, Robyn gave us a lesson on biphobia with ways of recognizing different forms of biphobia such as a lack of information, what she termed "pull of the binaries" and "erotophobia" and how to combat it. She also taught us a new word, "Bi*" pronounced "Bi-star" as a way to include the pan, fluid, and unlabeled aspects of the more "flexible" sexual orientation. Ellyn and I went over how to keep the B visible, using “A Guide to Bisexual/Pansexual/Fluid Etiquette” (FYI, the Creating Change booklet included a Trans etiquette guide!) as an example as well as learning how to create bi-specific activities and awareness without separatism. 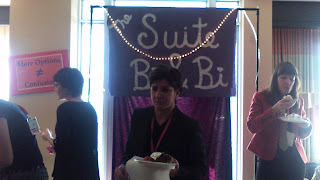 After lunch, I initiated a short activity to get us all back into Institute mode in which I would make a statement and those who have done or felt these things would come into the center of the room, another way for us to see how similar and different we are.
We talked about resources for the bi/pan/fluid communities such as the Bisexual Organizing Project, American Institute of Bisexuality and the Trevor Project as well as Facebook. We also shared examples of campaigns for Bi* awareness such as It Gets Better, I Am Visible and the Support Molli Response to find what are effective ways of gaining visibility. Also, if you're not familiar with Molli, check out her video about her bullying experience.

One of the most exciting parts of the Institute was the creation of some new media messages for the Bi/Pan/Fluid communities. Take a gander!
Myths about Bisexuality
Qualifying as an Authentic Bisexual
(The second one features yours truly portraying a cruel character which cannot seem to talk without moving her hands!)
Note: Appearance in these videos and/or photos is NOT an indication that any one identifies as bisexual/pan/fluid/queer or non-heteronormative. 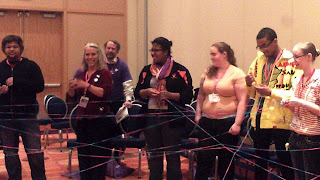 Lastly, Amy led us in sharing our experiences with the process of making the videos as well as to cover the topic of Bi* health. As we wrapped up, we stood in a circle and tossed about the appropriately colored pink, purple and blue yarn to one another as we shared our experiences and feelings about the Bi* Institute. We each snipped a piece the yarn as a reminder of our interconnectedness and of the memories that we will always have from this awesome experience.

The Bi/Pan/Fluid Institute was not the only thing for our community to enjoy outside of the Bi/Pan/Fluid Hospitality Suite, nicknamed, "Bi&Bi." On Friday, Amy co-facilitated the workshop, Bi Compared to Mono, which had a focus on bi/pan/fluid health disparities and what can be done. Saturday, Robyn facilitated both Make the Invisible Visible and Beyond Binaries, a workshop on becoming more familiar with the bi community and an interactive survey on our diversity, respectively. Ellyn covered the Bi/Pan/Fluid Caucus and I peeked on in this one, also assisted her a little bit on sharing some ideas on visibility, combating some of the other issues faced by the bi* community such as funding and coming up with creative ideas for resources.

I also checked out the session, What Are You? Living at Intersections: Power, Privilege and Oppression as Mixed Race People co-facilitated by none other than Morgan Goode, BiNet USA's treasurer and Ryan Li Dahlstrom. This was the first ever of such a space designated for biracial and multiracial persons to come together to address our issues, the room was packed I tell you. There were so many people that time ran out to address all of the issues that we as mix people of color face especially when the LGBT element is added to the intersectionality mix. The experience was overwhelming. This session in the end demanded extended in another room, which eventually led to the group dining at Baltimore's local eateries to further the discussion. Amy Andre, another bi face I spotted in the room, later interviews Morgan about the workshop. I hope this type of workshop develops into a much longer session if not its own Day Long Institute in the future of the Creating Change Conference. Hint, hint, Task Force. :) 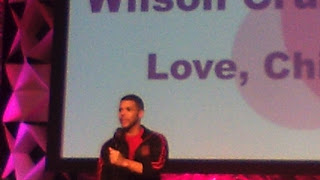 Sunday at brunch, I listened to Maryland's Governor, Martin O'Malley came to the Charm City to give a speech on the right things to do such as passing a law that protects transgendered Marylanders from discrimination in the workplace, housing and credit industries.
Finally, I was in amazement as actor and singer Wilson Cruz closed out the conference with a performance, "Love, Child..." working it through technical difficulties, even for a bit a cappella, to some good old jams like rock star. I danced and skipped out of the conference with good feelings about the Creating Change and the change within it, about people, community, progress and the future. 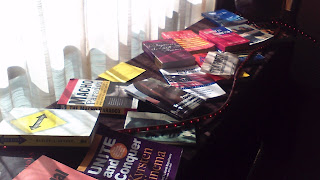 P.S. I wanted to share some of the Bi/Pan/Fluid themed literature that was donated to the Bi* Hospitality Suite and Paul was so kind enough to make a short video of the "Essential Bi Reading List" for those looking for more works about or by our community. Check it out! Another volunteer, our own Stacey Langely also contributed Unite and Conquer by Kyrsten Sinema and Getting Bi. More humorous and male-centric titled books included: Ask Me Anything, another from Marty Klein, How to Live with a Huge Penis, by Dr. Richard Jacob and Rev Owen Thomas, and Talking Cock, by Richard Herring (described to me as a male version of the Vagina Monologues). I personally would suggest reading the lighthearted Bisexual's Guide to the Universe as well as the groundbreaking, Bi Any Other Name if you have not heard of or had the chance to read them.

P.P.S. I want to thank you all in bearing with me in the delay of this report, while I was dealing with the loss of a very close loved one.
Thanks for the time and support!
xoxo
Posted by C. V. at 3:25 AM

My name is Andrew, and I am a research assistant for Dr. Terri Conley at the University of Michigan. We conduct social psychology research about sexual attitudes and behaviors, and inter-group relations. Our research is conducted from a feminist perspective, and we focus on gender, sexuality, and stigma.

For our research, it is important that we have the input of diverse populations, which is why we are contacting your group. We hope you will consider encouraging your group members to participate in our study!

Participation is voluntary and confidential, as we do not know the identities of our participants.

If you have any questions or concerns, please feel free to contact us at umsexualitylab@gmail.com. Answers to some of your questions might be found on Dr. Conley's professional website (http://www.lsa.umich.edu/psych/people/directory/profiles/faculty/?uniquename=conleyt).


Here is the link to our current survey.

You are being recruited by ANDREW (please note this when you take the survey). To participate, you must be 18+ years old and identify as a BISEXUAL WOMAN; this survey takes most participants less than 10 minutes to complete.

Link (if unable to click, please copy and paste it into your browser): http://umichpsych.qualtrics.com/SE/?SID=SV_0UFqbCbOkyFTKra

Thank you so much for your time! We hope that your group members will consider participating in our research!
Posted by C. V. at 2:57 AM