Kyrsten Sinema Thanks BiNet USA For Its Support 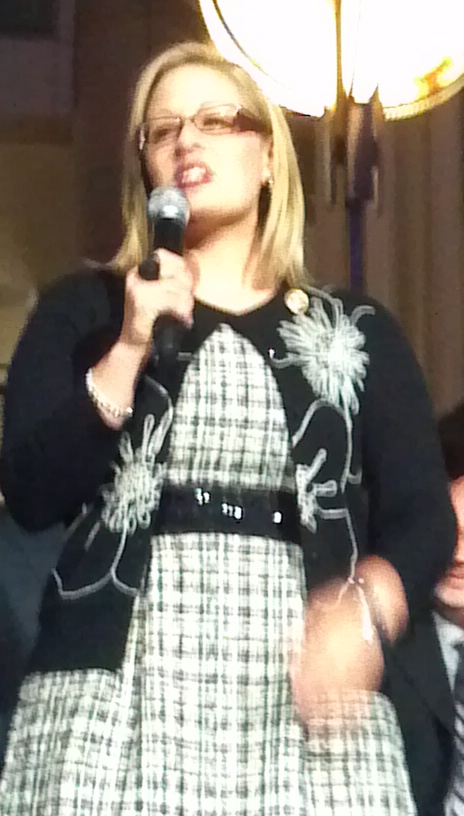 My good friend and fellow Bi Activist John Craig and I had the privilege last nite to attend the Victory Fund's Reception for the newly sworn in incoming class of LGBT legislators of the 113th Congress, including Senator Tammy Baldwin, and the first out bisexual ever elected to to Congress, Representative Kyrsten Sinema of Arizona!  The reception, held at the Reagan International Trade Center in Washington DC, had approximately 300 guests, and five of the six freshman LGBT representatives, along with Senator Baldwin and including Congresswoman Sinema. John and I got to meet and shake hands with both Senator Baldwin and Congresswoman Sinema, and while congratulating them I proudly wore my favorite "Bi American" button and made sure that Victory Fund officials, Senator Baldwin, and Congresswoman Sinema saw it! I mentioned that I was a member of BiNet USA and Congresswoman Sinema enthusiastically thanked BiNet for its support of her candidacy. She is a great speaker which kept the crowd enthralled, and she denoted the historic significance of breaking this glass ceiling, on top of Senator Baldwin's equally impressive accomplishment of being the first out Senator. Quite an event and reinforced to me how Kyrsten's election will elevate Bi visibility to a new level.

Editor's Note:  BiNet USA as an organization has not endorsed Congresswoman Sinema but as bisexual people, we are emotionally with her in spirit and are extremely proud of her achievements!
Posted by Unknown at 4:03 PM