A brief history of The Atlantic's biphobia 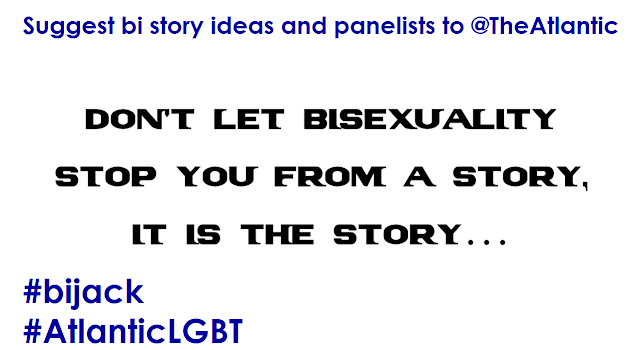 Don't forget to join us all day tomorrow as we #bijack the #AtlanticLGBT summit on the unfinished business of the LGBT community. They always seem to forget about us, let's help them remember the B in LGBT. Follow @BiNetUSA on Twitter!


A brief history of The Atlantic's biphobia

Articles discussing LGBT experiences without referencing the data, stories or experiences of bisexual people while also frequently ignoring the fact that bi people suffer higher rates of disparity than their gay, lesbian and straight counterparts (8):

Articles that ignore the fact that the majority of people in the article are bisexual identified (5):


Articles that use gay to refer to LGBT people and/or uses misorientation to erase a bi person's bisexual identity (3):

Articles whether the author utilized bisexually erasive language to refer to the LGBT community, even though they were interviewing self identified bisexual individuals (3):

Articles where the really great writer, Ta-Nehisi Coates (@tanehisicoates), engages in bisexual erasure and ignores the impact of biphobia, often with #callousdisregard  (3):


Articles that refer to bisexuals as inanimate objects (1):
http://www.theatlantic.com/technology/archive/2015/03/the-curious-case-of-men-and-womens-buttons/388844/
Posted by Unknown at 12:30 AM

Bijack With Us - Unfinished Business: The Atlantic's LGBT Summit 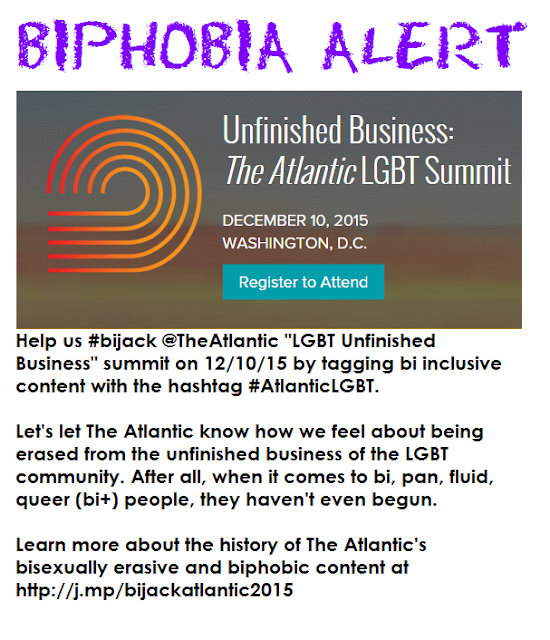 Help @BiNetUSA #bijack The Atlantic's Unfinished Business LGBT Summit, all you have to do is tag bi inclusive content with the hashtag #AtlanticLGBT and/or #bijack. Let's let them know there is a thriving bi, pan, fluid, queer (bi+) community that deserves an apology from The Atlantic for it's long history of bisexual erasure and biphobia.


It's extremely disappointing to see an The Atlantic Magazine event on "LGBT Unfinished Business" choose not to feature bi experts or community advocates. The most well-know bi person featured at the summit is not an expert on the bi community and once famously  said that she chooses not to "pull out the 'bisexual' word because nobody likes the bisexuals".

Then again, Cynthia Nixon is on a panel about a lesbian one woman show, so lucky us?

We're not surprised though, bi advocates have consistently tried to get inclusion of bi voices, bi stories and bi community from The Atlantic to no avail. And people ask us why we have to protest the LGBT community all the time?!

We lost another kid recently, a member of the bi, pan, fluid, queer (bi+) community took her own life, on the heels of multiple deaths by suicide that our community continues to weather. What else do we expect when nearly 50 percent of bi people think seriously about suicide and only 5 percent of bi+ youth reported being happy in the Human Rights Campaign's Bi Youth Report?

They certainly can't trust The Atlantic for life saving, sustaining, affirming, relevant, and intentionally bisexuality aware reporting. The refusal by media to amplify, or at times even acknowledge, the lives, realities, and experiences of the bisexual community, which includes over 30 different bisexuality related identities, is murdering our kids.

Many of us have begun to advocate that our community vocally disrupt bi erasure at public or private events with "bi-sex-u-al" chants or with bi+ American Sign Language and handmade signs. We believe biphobia must be actively confronted, especially when it takes the harmful form of bisexual erasure.


If a speech, panel or session, gives the strong impression there is no bisexual community, it's bi erasure.


If a speaker refers to lesbian, gay, bisexual, transgender (LGBT) community concerns without referencing bisexual stats like 61% of bi women and 37% of bi men having experienced domestic violence OR 42% percent of bi women reporting they've been raped OR nearly 50% of bi people reporting they've seriously considered or attempted suicide, it's bi erasure.

If there isn't a single person at a conference to speak in an expert way to the work THEY DO to save lives and keep them safe in the bi+ community, it's bi erasure.

If there's not someone who is proud to speak to their own resiliency and that of their community, it's bi erasure.


In the better news column, there are multiple trans community experts on panels at The Atlantic's Unfinished Business conference, so the T will not be silent. We are thrilled that bi+ trans advocate Hayden Mora (@haydenlmora) is on a panel and we love that Casa Ruby's pan, trans and Latina founder, Ruby Corado (@CasaRubyDC), is also speaking on a panel. And we appreciate that there is a whole session devoted to the story of Nicole, a trans kid who will appear by Skype.


Nowhere near enough trans content, but at least it's not the slap in the face and a literal kick in the teeth that this event is for the bisexual community. Luckily we bisexuals have other options than just staying silent!

Let them know you're sick of @TheAtlantic magazine's bi erasure and biphobia. Let's all send a clear message that the B is here to stay!


Out of over 300 TheAtlantic.com articles with the word bisexual in them, only a few speak to bisexual community concerns. More frequently they focus on bi strippers, lying congresspeople, promoting harmful bisexual tropes and stereotypes and erasing the lived narrative of bi+ people.

In fact, only 2 articles discuss bi+ people with concern for their well-being, but only on TV.

We get it, we're good for sex and watching on TV, and you're not too bummed about us governing, but you still have trouble saying our name @TheAtlantic, and it's a problem.


READ NEXT: A brief history of The Atlantic's biphobia"