Hacks, Demons and More: Behind The Scenes of Bisexual Advocacy in 2016


I received a notification on the Google homepage of an attempted “nation level” hack of my personal email on the very same day Google notified many other “activists, journalists, and policy-makers taking bold stands around the world” receiving the same alert.

My warning was on a lil red bar blinking on the Google homepage. To keep it real with you, it was there for like a half a day before I was like “Wait, Google. Are you talking TO ME?” I immediately wanted to screenshot it, but thought better of it as said computer had been intruded upon. So I made a video on my phone of the info I received. This warning provides further evidence of an ongoing campaign to target bisexual advocacy, bisexual activists and BiNet USA.

Also hacked? Share your video or photo of the dox, hack or troll like Faith did here without comments. FWIW, you can also check out a (sometimes NSFW) bisexual demon here. Photo Credit: BisexualDemonDean Tumblr

Other instances of online harm that BiNet USA board members, officers and advisors have recently experienced:

In the most recent case, a foreign credit card paid for a year’s worth of services on match.com and sent disturbing messages to a BiNet USA board member suggesting that sexual services could be provided at the board member’s home address (reported to match.com, August 2016). Doxing of bi advocates (and online violence as a whole) is a regular occurrence, with former and current board members experiencing having their personal addresses, photos or partners’ names posted to the internet as evidence of them being “straight” or “gay”, even when they are proudly #stillbisexual. Learn more about how to prevent doxing from the #crashoverridenetwork.

In August 2016, the BiNet USA website was hacked and held hostage for bitcoin by hackers who may be based in Saudi Arabia, and have a high interest in hacking websites related to art, journalism and freedom. Thanks to the alert from bi advocate Patricia S., and BiNet USA volunteers like Dennis S., we were able to get our website back. Learn more about digital hardening for Wordpress sites and why security for your website is so important from Wordpress. 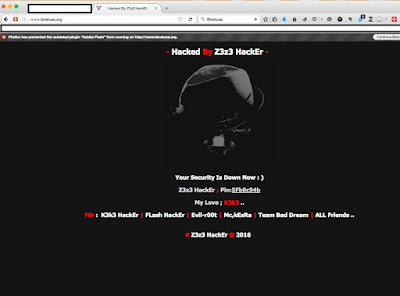 Yup! After our amazing Bisexual Community briefing at the White House was livestreamed in September 2016 on the White House website, Victor Raymond, an esteemed sociology professor and Rosebud Lakota Sioux tribe member, found himself embroiled in a right-wing press attack as they disparaged bisexual community support for Black Lives Matter.


Outlets like The Weekly Standard and Barbwire, among others, actually claimed that Raymond’s spoken statement to open the gathering constituted a “bisexual demon invocation” at the White House. Yet, a few thousand right wing posts later, Victor Raymond, also a BiNet USA co-founder, is still living proudly demon free.  Read more about Victor, his work with BiNet USA and our support for #StandingRock.


L, G, and T mostly silent in their support of the B

Unfortunately, along with the rise in right wing attacks on bisexuality, we've also seen a rise in open hostility from within the LGBT community toward bisexual identity itself. Whether it’s a lesbian identified Curve Magazine editor in chief declining to create space for bi-identified women in Slate, or the new Dior Homme spokesperson Boy George pulling a “boy george” to become a new new arbiter of what is biphobic and what is not, the hits keep coming from within the very space many bisexual people hoped would be safe. 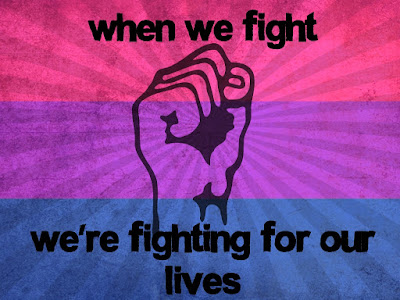 Caption: grunge-y bisexual flag background. In the middle of the picture there’s a black first with a sunburst spreading from its center. Upper text: “when we fight”. Lower text: “we’re fighting for our lives”. Image Credit: Bi: Notes for a bisexual revolution author Shiri Eisner's bidyke tumblr via fandomsandfeminism tumblr

Silence on gay and lesbian led attacks on bisexuality from organizations who call themselves "LGBT" remains deafening. Silver lining? We've also seen a huge increase in mainstream understanding about systemic oppression of bi+ people, and the term we use for that pain, fear, and rejection: biphobia. Let us take our wins where we can and remember; never fear, for bisexuality will always be here. Recently experienced bisexual discrimination? Share your experience with the #bistories project.

The board of BiNet USA recently decided to do a comprehensive overhaul of our digital system to make it harder for bad actors to access and use against us. We've also changed the way we provide offerings to bisexual community organizers including:


Stay tuned to the BiNet USA blog and The BiCast podcast for new tips, tricks on digital hygiene, and digital hardening for the everyday bisexual. And don’t forget to join us in community on facebook.com/groups/binetusa.

Posted by Faith Cheltenham at 2:37 AM