We have always known BiNet USA board member Denise Penn was an amazing bisexual+/LGBTQIA activist. We join the Selection Committee in celebrating her tireless volunteerism and work. 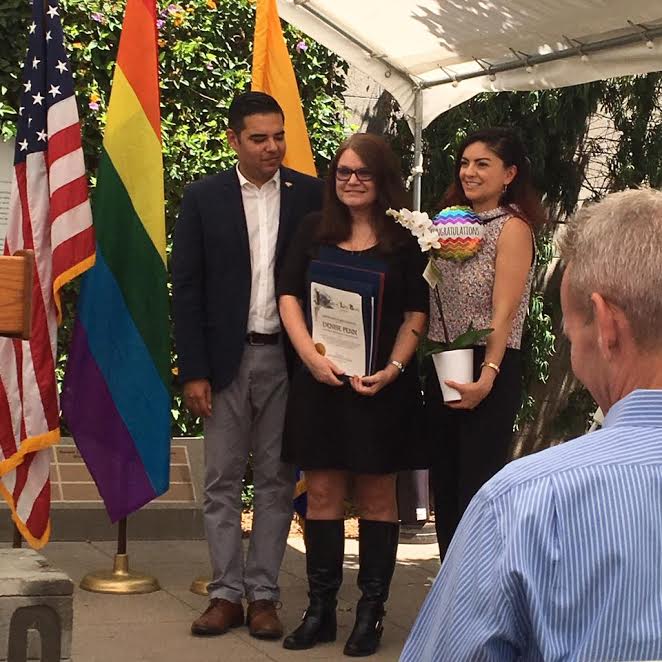 Every year, an official Harvey Milk Park Committee selects honorees whose names will be placed on a brick in the wall of the Plaza.
Those nominated can be either living or deceased and who identify as LGBTQ community members, and have made exceptional / outstanding contributions serving the Long Beach-area LGBTQ community. 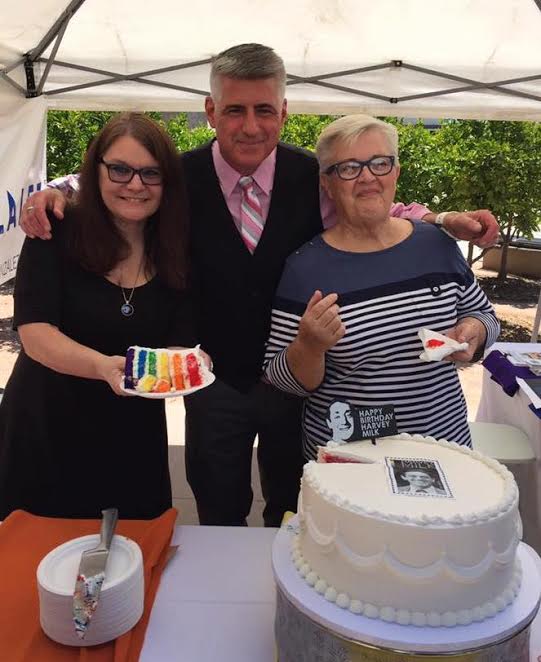 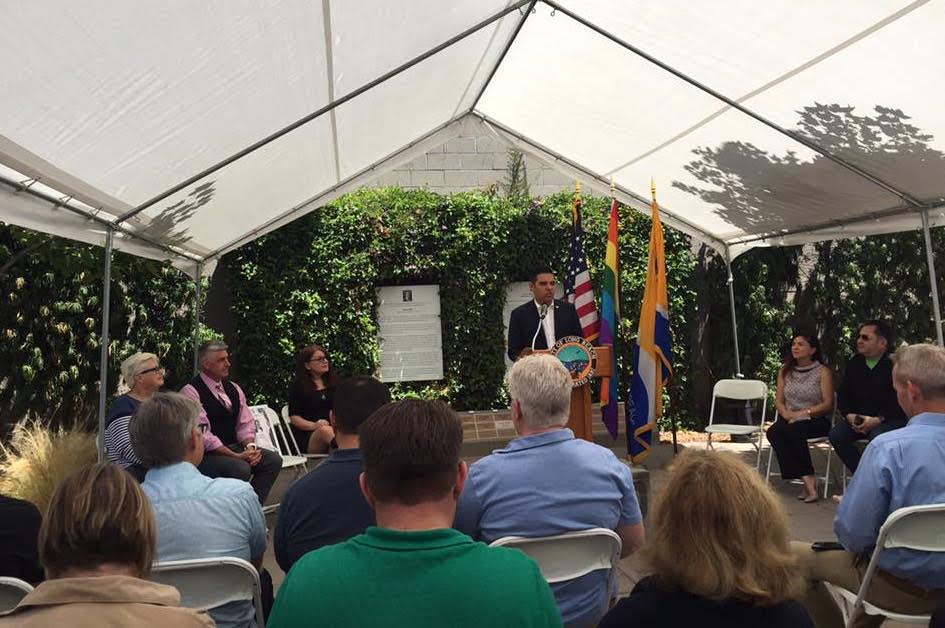 Denise Penn has been working as an advocacy journalist covering issues for the LGBT and HIV affected community for nearly three decades and has promoted civil rights for all.
From 1992 to 2007,  she gave a voice to the Long Beach LGBT community as a reporter, a columnist and contributing editor for the Orange County and Long Beach BLADE from the time of the publication’s inception in 1992.  Prior to this time, there were gay publications published in Los Angeles, there was nothing that addressed the issues facing LGBT  readers in Long Beach.  Her coverage of discrimination cases and hate crimes have received national attention.
From 1996 to 2008, she Produced and hosted The Gay & Lesbian News Magazine, an award-winning weekly live cable television program serving the Long Beach LGBT community, presenting news and entertainment many artists, actors, musicians, directors and political figures as well as ordinary people with stories to tell.  (Denise stepped up following hate crime against the show’s founder, Bob LaFont.)

She coordinated and moderated the discussion panels for the Long Beach International Film Festival and Cinema Out  film festival in Long Beach in the late nineties and from 1997 to 2001, participated as a cast member, along with other community leaders,  in Santa Maria House's annual HIV/AIDS fundraising murder mystery "Mystery Night on the Amtrak" every year.
In 2007, She became one of the original columnists for The Long Beach Post, founded by Dr. Robert Garcia and Shaun Lumachi February 13, 2007.
From 2006 to 2008, She was PAC Chair of  Long Beach Lambda Democratic Club, and Co-Chair of the Annual Human Rights Award Dinner in 2008.
In  2010, she was a Founding Board Member of  Artful Thinking Organization: Artful Thinking Organization (ATO) is a nonprofit formed in 2010 to engage in artful activities related to educating the public about HIV/AIDS and Breast Cancer. ATO sponsors the Long Beach Dyke March that occurs on the Friday preceding Pride every year.
Served also on the Steering Committee of the Long Beach Hisotrical Society’s LGBT History Project, donating some artifacts and articles to the exhibit, “Coming Out in Long Beach.”

Thank you Denise for all you do!!! 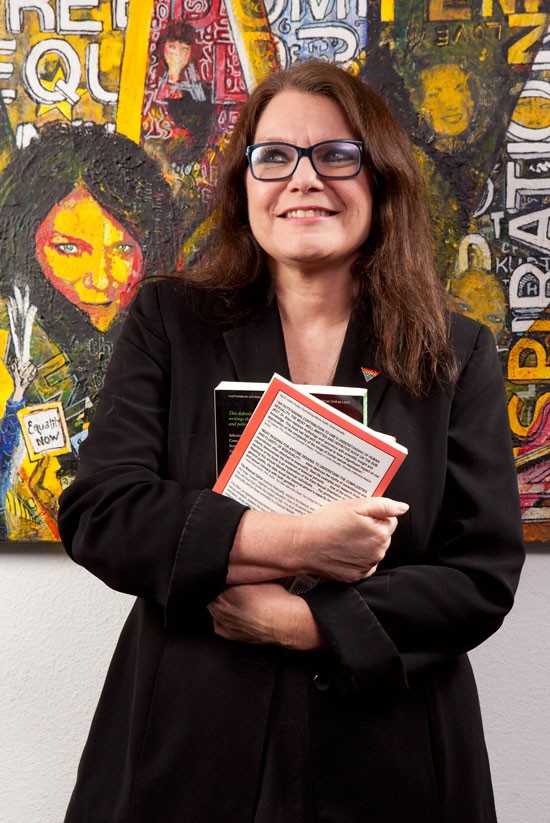 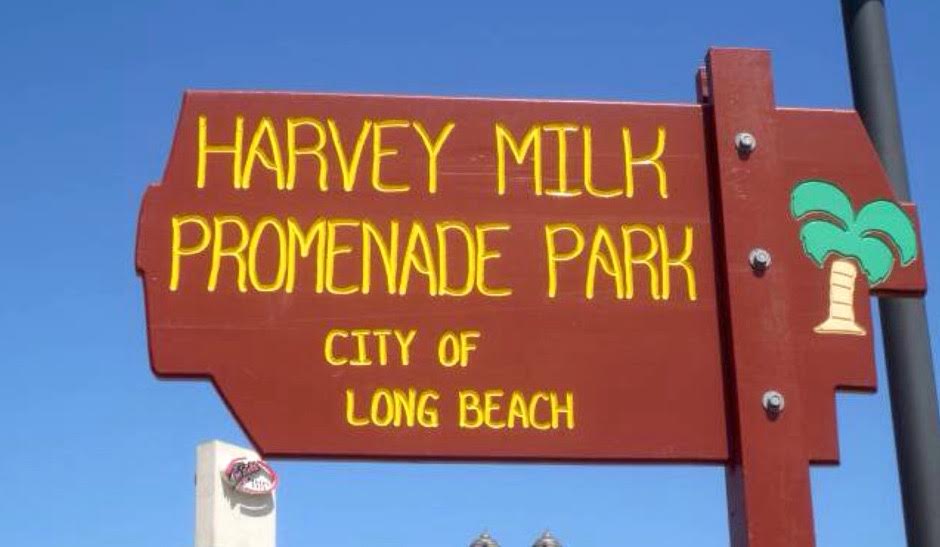 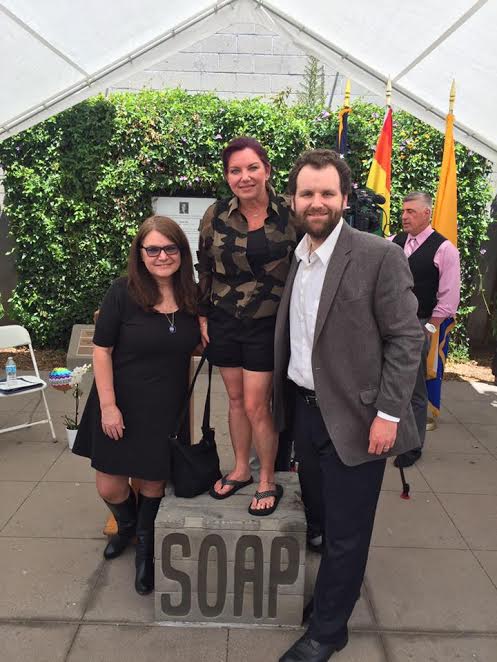 Links on efforts by D.C. locals to take back their Pride below!

Posted by Faith Cheltenham at 4:28 PM

Vote for the Bi Series!! 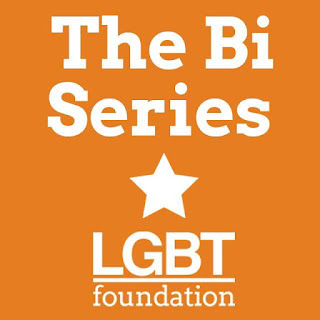 Please vote for The #BiSeries as Team of The Year in LGBT Foundation's Volunteer Awards! This will really help us get us get funding for a Bi Programme next year. Share!
LGBT Foundation/surveys 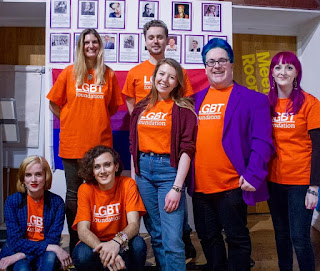 The Bi Series is the only bi-specific project run by LGBT Foundation and the only year-long bi project run by an LGBT charity in the UK, and it's run entirely by volunteers. Thanks to the bi advocates and activists on this team, bi community members have a safe space where they know they will be welcome. So far, this project is run with no funding. Bi Series volunteers have called in favours from other members of the bi community to run these events, and people have travelled from all over the country to attend them. Our big launch event sold out and we are hoping even more people come to the Bi Takeover For Pride on 19th August. Our next event is about bi wellbeing and it's on 17th June. 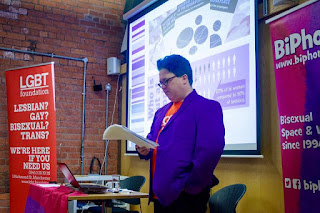 No name or email address required


Will you support the march?  Will you join the bisexual+ contingent as we proudly march in what could be one of the largest bisexual contingents of all time?
The Equality March for Unity & Pride is a grassroots movement that will celebrate, inspire, and mobilize the diverse LGBTQ+ communities to clearly and peacefully oppose efforts to persecute and discriminate against LGBTQ+ individuals.

If you can, please consider contributing to the March via my personal link: https://www.crowdrise.com/equality-march-2017/fundraiser/lynnettemcfadzen1

Thanks for sharing this news with your friends, organizations and communities,

If I could ask President Donald Trump something (and there was evidence my vagina and dignity would survive), I’d ask:

Real talk @realdonaldtrump did you think deporting #trumpdup millions would lead to a recession as fast as it did? #BiQuestionsTrump
— Faith Cheltenham (@thefayth) May 13, 2017


So @realdonaldtrump if ya love LGBT people, say #BlackLivesMatter as much as Blue. Black #LGBTQ people matter too. #BiQuestionsTrump
— Faith Cheltenham (@thefayth) May 13, 2017

Honestly? As a bisexual person of color, I have many questions for President Trump. And, I have questions for the bi+ community and our allies too––questions about who we are, what we stand for, how we’re surviving, and how we can hold each other, our leadership, and the President accountable.


Are you, like me, terrified for the present and futures of bi+ youth, trans youth, people of color (POC) youth, and bi+ trans POC youth? For all lesbian, gay, bisexual, transgender, queer, intersex and asexual people?

Are you seriously worried about the health of all your body parts, especially your heart? Since we so know how to get it from both sides? Have you contributed your story to acaworks.org? Doing so made me feel better, you might also try it.


Do you fear for your own safety? Do you close your eyes when a person you've never met gets close, almost too close, but not *that* close? Do you feel a bit triggered, especially upon realizing you're in for 4-8 years of deplorability, depending on good behavior?

If you are a person of color, has the increase in racism, both conservative and liberal, really been a lot to handle? If you are a bi+ person who considers themselves an ally to people of color (POC), have you struggled with your desire to do better in identifying and working to dismantle white supremacy?

Is mainstream and LGBT media amplifying misinformation about bisexual people when they incorrectly report on bi+ celebs like Mel B, Angelina Jolie and Amber Heard and their very real experiences of violence? Is it that better or worse than when they neglect to report on our experiences at all?


Once again, is our collective experience being used to sell records and films, to generate donations to organizations, and be silently consumed without a single whisper of “our letter” or an acknowledgment of our very existence?

While things are different today, it can feel like the terror, grief, and rage are as real now as they were then, or as real as it's always been. The threat of bisexuals being erased and forgotten from media narratives surrounding our own trauma remains relevant. The confusion of which way to go or which way to march remains. Luckily, bisexuals are still the ones who can go more than one way.


Kudos to the dreamers, the fighters, rule breakers and boundary makers. Keep on letter writers! Keep strong and carry on. Personal and political threats to our bodies are something #bisexuals are used to.

We are also familiar with Fighting. The. Fuck. Back.

One of the ways I do that is by “bisexually questioning” the truths provided to me. I think if we approach most problems with the "bisexual intersectional" in mind, it makes it harder to sit back and do nothing.

So I’m gonna go ask President Trump some of my bi questions via Twitter, I hear he's on there! I encourage you to do the same using the hashtag #BiQuestionsTrump.

Many thanks to BiNet USA President Lynnette McFadzen and BiNet USA Secretary Beth Sherouse for their assistance with this campaign and supporting materials.

Posted by Faith Cheltenham at 11:00 PM