"NO HOMO NO HETERO: BEING BLACK, BISEXUAL, AND MALE IN AMERICA A PANEL DISCUSSION 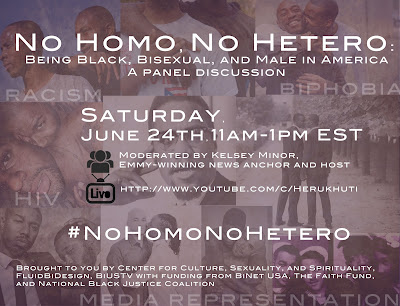 ‘NO HOMO NO HETERO”

BEING BLACK, BISEXUAL, AND MALE IN AMERICA
A PANEL DISCUSSION

BROUGHT TO YOU BY CENTER FOR CULTURE, SEXUALITY, AND SPIRITUALITY,
FLUIDBIDESIGN, BiUSTV, WITH FUNDING FROM BINETUSA, THE FAITH FUND, AND NATIONAL BLACK JUSTICE COALITION 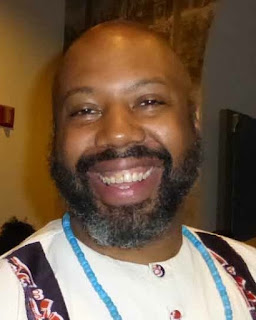 Dr.  Heru Khuti
"Sexual fluidity is a controversial and misunderstood topic in the United States. In mainstream media and everyday conversations, sexually fluid people (e.g., bisexuals, pansexuals, polysexuals, non-monosexuals, etc.) are labeled as confused, promiscuous, hedonistic, and fence-sitting, people who cannot or will not make up their minds. Popular belief is that they want their cake and want to eat it too, straight people who want to dabble in gay sex, or homosexuals who do not have the courage to fully identify as gay/lesbian. For Black people, these stereotypes regarding sexual fluidity can be extremely alienating and dangerous. Historically, Black people living in the United States have had to confront stereotypes about their sexual prowess and promiscuity as well as the challenge to conform to gender norms of white America. The Mandingo, Buck, and Jezebel are common racist caricatures of Black sexual and gender expression. These dynamics contribute to make sexual fluidity among Black people less documented and discussed as well as more complex."- Dr. Heru Khuti 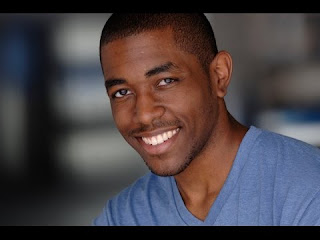 Film maker, David J. Cork
"When the community you are born into rejects to acknowledge the fullness of your life, how can one find like minded individuals as a supportive community? Heterosexual and gay communities often dismiss bisexuality as a cover for homosexuality or excuse for promiscuity. The African-American community has a reputation of not accepting anything that goes against the heteronormative. For those Black men who are bisexual, finding a community for acceptance is very challenging."- David J Cork, BiUSTV 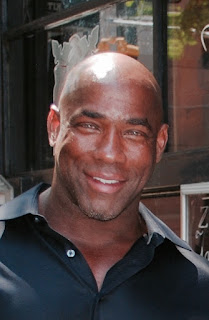 
J. Christopher Neal is an artist, educator, youth leadership professional, and community organizer. He’s the founder of FluidBiDesign, a New York-based organization serving the needs of sexually fluid people of African descent through MenKind, a support and discussion group for men, online community, and cultural programming. His brilliant artwork can be seen in the historic anthology, Recognize: The Voices of Bisexual Men (Bisexual Resource Center), which I co-edited with Robyn Ochs. In 2015, Heritage of Pride, which produces the annual New York City LGBT Pride Festival, selected him as one of four grand marshals. It was the first time in the history of the world’s oldest LGBT pride festivals that a bisexual grand marshal was chosen. A surprising milestone considering Brenda Howard, a bisexual woman, was one of the principal organizers of the first LGBT pride march to commemorate the riots at the Stonewall Bar, riots that sparked the modern LGBT movement. https://sacredsexualities.org/2016/06/27/after-pride-pulse-j-christopher-neal-interview/ 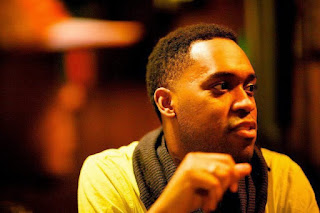 
Kelsey Minor is a New York City based journalist. The Emmy Award-Winning television journalist has worked in news all over the country including places like Chicago, Mississippi, Idaho, and Iowa. A graduate of Columbia College Chicago Kelsey is an exceptional storyteller and interviewer. He has covered a number of presidential elections and has even had one-on-one interviews with candidates.


This Saturday a history making panel on being black, bisexual and male will happen live via Youtube.

The event is also part of a documentary project, No Homo, No Hetero (working title), co-executive produced by H. "Herukhuti" Sharif Williams, and David J Cork, which examines the lives, loves, and challenges of Black bisexual men in the United States. The documentary has received support from Third World Newsreel through its Video Production Workshop and Fellowship.


Posted by The BiCast at 9:40 PM Links to this post

Yesterday it was our time to march - and now it's time to turn this March into a Movement. Today is the one-year mark of the Pulse massacre in Orlando that claimed the lives of 49 people, mostly LGBTQ and Latinx young people. The horror unfolded in the middle of Pride month on Latinx night at Pulse, a popular gathering place for young queer people of color.

We must ensure the lasting memorial of the Pulse massacre is the real change that comes from challenging hatred, discrimination, and violence of all kinds.
Join us as we #HonorThemWithAction.
It’s not enough to mourn those taken from us. It’s not enough to celebrate our collective resilience. We cannot allow the Pulse massacre to be yet another national tragedy. This must be a national turning point that spurs us to new action.

We need you to step up and speak out against all forms of violence, be they mass shootings, genocide abroad, everyday gun violence, vandalism at houses of worship, and yes, even hateful words spoken from a pulpit, a pew, or over the dinner table.
At a moment when some sought to meet fear with fear and hate with hate, the Orlando community came together, united in a commitment to challenge bigotry and hatred, not nourish it. A deep resilience emerged from survivors, victims’ loved ones, Orlando residents, elected leaders, LGBTQ people and our allies around the world. One year ago people held vigils and fundraisers to directly aid the families of those killed and the survivors and committed to combatting hatred of all kinds. Tonight, many will gather to grieve and hold each other close.
As we think about all the ways in which our world is different one year later, I challenge you to join us in uprooting and challenging hatred of all kinds, and to take action each and every day to make the world different, better, and safer for all of us. Thank you for your compassion, your solidarity, and your support. But most of all, thank you for standing with us to do the work of fully addressing and combating hatred wherever it exists.
The #HonorThemWithAction campaign will be providing 49 action ideas over the course of 7 weeks in honor of each of the lives taken at Pulse Nightclub one year ago. Every Monday we will provide you with a list of 7 actions you can take for that week. They will include ways to reflect on Pulse but will also highlight ways to take action on the platform issues of the Equality March for Unity and Pride: Biphobia, Disability Rights, Elder Rights, Faith & Religion, HIV/AIDS, Immigration Justice, Indigenous/Two Spirit, Income Inequality, International, Legislative Issues, Racial Justice, Reproductive Justice, Transphobia, Violence, Youth. The first 7 actions are included below. We hope that your actions this week will help to grow this movement as we take on actions in later weeks. One easy but effective way of doing this is to share this email with your network:
#HonorThemWithAction Week One
Day One | Monday, June 12, 2017
Attend or create a Pulse Remembrance event in your local community or watch one online. Be sure to use #HonorThemWithAction on social media if you are live tweeting from events.
Day Two | Tuesday, June 13, 2017
Reflect on and then write a letter to the editor to your local paper encouraging people in your community to honor the lives taken during the Pulse Massacre by committing to action to diminish the harm perpetrated against members of the LGBTQ community.
Day Three| Wednesday, June 14, 2017
As a part of your commitment to 49 Days of Action, make a list of friends and family you want to join you and share with them these emails.
Day Four| Thursday, June 15, 2017
Have intentional 1-on-1 conversations with 3 people from your list to discuss why you are participating in the “HonorThemWithAction” campaign and the importance of them joining you in honoring the lives taken during the Pulse Massacre through action.
Day Five| Friday, June 16, 2017
Contact your member of Congress and demand they sign on as a co-sponsor for the Disarm Hate Act, a bill that closes the Violent Hate Crimes Loophole that permits the sale of firearms to individuals who have been convicted of threatening with a deadly weapon or assaulting someone based on their race, religion, gender, sexual orientation, gender identity, or disability.
Day Six| Saturday, June 17, 2017
Today marks the second year remembrance of the shooting at Mother Emanuel AME in Charleston, South Carolina. Honor the lives taken there and at Pulse by adding your voice to the #DisarmHate campaign. Learn more about the campaign and utilize social media tools using the resources found HERE.
Day Seven| Sunday, June 18, 2017
Share on social media and with friends and family the actions you’ve taken this week as a part of the #HonorThemWithAction campaign.
Report back to the campaign about the outcomes from the actions you’ve taken using this form:  https://goo.gl/forms/Oa64v5QSCv9aGjtC3 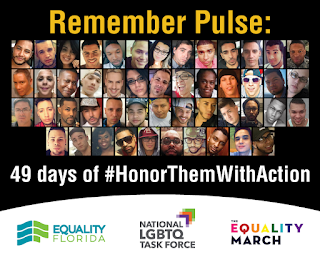 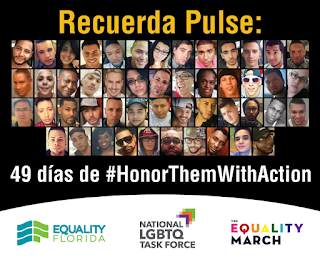 Posted by The BiCast at 7:02 PM Links to this post