We Are The Bisexuals You've Been Looking For This #GivingTuesday 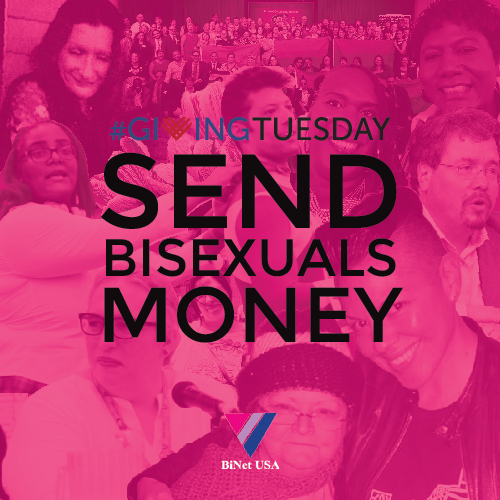 
This year's original BiNet USA artwork for #GivingTuesday is courtesy of Nerdscarf (they/them). #hireBTPOC
Posted by Faith Cheltenham at 3:19 AM

PRESS​ ​RELEASE No Homo No Hetero

$24,000 in four days of crowdfunding! Fresh off of a screening at the BECAUSE Conference in St. Paul, Minnesota, where they launched the crowdfunding campaign, the team of H. Sharif “Herukhuti” Williams and David J. Cork have raised $24,000 in four days for their documentary film​ ​project,​ No​ ​Homo​ ​|​ ​No​ ​Hetero:​ ​Sexual​ ​Fluidity​ ​and​ ​Manhood​ ​in​ ​Black​ ​America​.
BiUs Entertainment (BiUS) and the Center for Culture, Sexuality, and Spirituality (CCSS) are producing the historic documentary on Black bisexual men. The film is being co-directed by Cork, co-founder and chief creative officer of BiUS, and founder and Dr. Herukhuti, chief erotics officer ​ ​of​ ​CCSS.
The directorial team started filming this fall and have produced a work in progress trailer that is being screened at festivals and conferences. BiNet USA, Faith Cheltenham (yesblackpeople.com), National Black Justice Coalition, and Human Rights Campaign
Foundation helped finance the production of the trailer, which was a fellowship project Dr. Herukhuti ​ ​completed​ ​at​ ​Third​ ​World​ ​Newsreel’s​ ​production​ ​workshop.
On Saturday, November 11th, they launched a crowdfunding campaign at https://igg.me/at/NoHomoNoHetero (Indiegogo) to finance the next phase of production, which will include filming bisexual men, their partners, and bisexual experts in Los Angeles, Atlanta, and New York City. The following organizations have already pledged support: BiNet USA,
Bisexual ​ ​Organizing​ ​Project,​ ​and​ National​​ ​LGBTQ​ ​Task​ ​Force.
No Homo | No Hetero ​will explore the complexities, challenges, and beauty of being Black, bisexual and male in the United States. Through interviews, performance art, and archival footage, the feature-length, experimental docu-poem invites the audience to explore the politics of living and loving authentically at the contentious intersection of racism, biphobia, and toxic masculinity.
H. Sharif “Herukhuti” Williams, PhD, MEd,​ a longtime activist, educator, scholar, and artist, was one of the co-organizers of the 2015 White House Bisexual Community Policy Briefings. His anthology, ​Recognize: The Voices of Bisexual Men was a five-time, Bisexual Book Awards winner and Lambda Literary Awards Finalist. ​David J. Cork​, actor, director, and writer, is the co-founder and chief creative officer of BiUS​ Entertainment​, a production company dedicated to providing content that showcases underrepresented minorities. His work on the hit web series,
Bi:​ ​The​ ​Webseries​ ​has​ ​been​ ​featured​ ​on​ Now​ ​This​ ​and​ ​in​ The​ ​Huffington​ ​Post​​ ​and​ NBC​ ​OUT​.